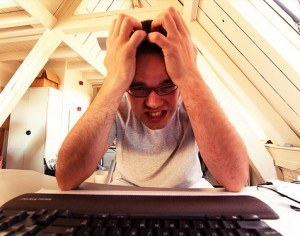 I recently had a client come to me because he had two days left before his launch was due to close and he only sold one spot. He didn’t know where to turn.

I explained that it was too late to make this launch a success. Even with all my marketing wisdom I would admit defeat.

He paused and paused some more.

Then I said, “But only this round.”

I explained to him that already had a lot of pieces in place. He just needed to tweak a few things to make sure his next launch was more successful.

He calmed down and told me he hadn’t even thought about his next launch.

Nobody ever does. Everybody who creates a lackluster launch feels like this is their only shot at making money.

Nope. It’s just a chance to learn about what you did right, so you can make it more successful next time.

“There is no such thing as failure. There are only results.” – Tony Robbins

Dealing with a failed launch is all about learning from it. Looking at what went well and what didn’t.

There is no need to panic when a launch doesn’t go that well. That’s the worst thing you can do.

That’s why it’s very important to create a review system for each launch. You need to review it objectively and figure out to implement more of the stuff you did right in your next launch.

In the next post I’m going to talk about developing a launch review system, so you can build on your previous launch to make your next one more successful.

What is the most frustrating thing about a product launch?