I live in San Antonio where most people are friendly and smile at strangers. It’s a nice place to live, until you get in your car.

Before I jump into my story, I want you to know that I grew up an hour outside of Philadelphia, where no one smiles at each other until you’ve had a decent conversation with them about the Eagles (Philly’s football team), I expect that people are going to be jerks on the road.

In San Antonio, people are friendlier to each other. They smile more and start conversations easier. I expect people to kindly share the road, which for the most part they do, but there are a fair amount of people that don’t abide by the same code. They don’t care if you are going 60 mph, they will pull out in front of you, or will just refuse to let you in even when you’ve waited your turn.

Ok, so I was driving to the grocery story with my son a few days ago, and within the span of 5 minutes, I had two similar experiences that turned out completely differently.

The first one caused me to almost release a few four-letter words that I won’t repeat here. I was trying to merge into the right lane on the highway, and this guy sped up next to me, pulled right in front of me, then took the next exit. He was within an inch of scraping my car, and being a jerk trying to get to where he wanted to go with little regard toward our safety or the stress factor.

I took five big breaths, calmed down, and was able to let it go.

The next situation was basically the exact same scenario, but one thing happened differently.

He waved an apology

He stuck his arm out the window and apologized for being a jerk.

This time, I didn’t need any big breaths, and I didn’t want to curse; I just waved back.

I know they were both wrong, but the apology endeared me to the 2nd jerk. He realized that he wasn’t acting well. He might have been just as big of a jerk, but once I saw the wave of his hand, it was ok.

Companies have this same tool in their toolbox of acknowledging it if they’ve been a jerk, but they don’t use it very often. They feel entitled to treat their customers like crap. I bet you’ve seen this when you try to return something. Even though it’s their job, the person at the Returns counter looks at you like you are an alien with three eyes who wants to eat their children.

I subscribe to a lot of email newsletters, and most don’t even try to develop a connection with me. All they want is my attention so they can sell me something.

Then I got this email from Jeff Goins where he said “I’m sorry”: 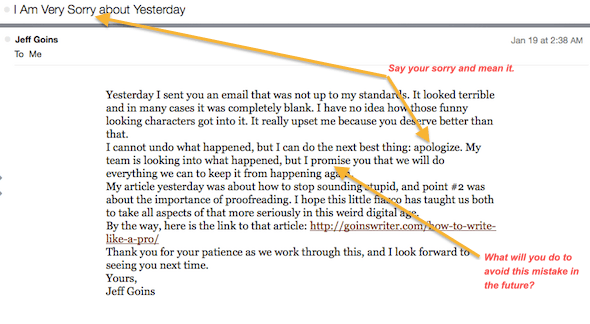 When I saw this, I felt the person behind the business. I actually didn’t see the first email he had sent that had formatting issues he was apologizing about. But when I saw this follow-up email from him, I knew he cared about the product he put out into the world. And it made me more interested in his company and his product.

If Jeff put out a fake apology, I would have felt it. There is a company that spilled oil in the Gulf of Mexico near where I live that shall not be named, but their apology felt fake and forced. I used to choose to go to them over other gas stations, but now I avoid theirs like the plague.

Show them why you care, through your actions.

They want to see that you aren’t just trying to squeeze another few bucks out of them. They want to make sure you care about them.

I can’t tell you exactly what that means or looks like for your particular product or service.  And in fact, even if I made suggestions, the truth is that the more original you are, the more genuine, your message will probably come across to your customers, so I think it’s best if you come up with your own way to show people you care.

And if you make a mistake, or your product or service doesn’t measure up to their expectations, you’ll gain more respect by “making it right” to them than by ignoring them.

You might even gain MORE business from it. My client and I, created an online giveaway, that confused a lot of people. They voiced their displeasure very loudly. We strategized a plan. How we would apologize and how we would fix the issue.

He apologized for how the contest was run to his email list, Facebook, and Twitter community. He called a few people who were a little extra vocal in their displeasure. He then ran another contest that made almost everyone happy. Can’t please everyone. He tried to make things right and that’s what people care about.

You just have to keep showing them you care through your actions, every way and every opportunity that you can.

That’s what has worked well for other people I’ve met and worked with.

Next time you upset a customer or group of customers try letting go of your ego, and just say I’m sorry. Watch their reaction.

Have you ever made a mistake in your business and then made an apology? And what was the outcome?